The state of play: Climate change

At the time, a July heatwave had just been linked to more than 90 deaths in Quebec. Less than a month later, British Columbia announced that 2018 was officially the province’s worst-ever summer for forest fire damage.

The dramatic events at home matched a global pattern, and we wanted to write a piece that gave an overview of the climate “state of play.”

Then, on Oct. 8, 2018, the UN’s Intergovernmental Panel on Climate Change issued a report that added a disturbing new dimension to this reality. The report concluded that humans have only 12 years to “limit climate catastrophe.”

The report is a forceful call for governments to take swift climate action. For us at Ecojustice, it is a powerful reminder of why we go to court and use the power of the law to combat climate change.

Climate change is real, it is happening now, and it is caused by human activity — mostly through the burning of fossil fuels. This conclusion is shared by 97% of climate scientists and should be doubted by no reasonable person.

Increasingly, we are seeing the deadly impacts of climate change with our own eyes.

In recent weeks, headlines about extreme heatwaves and wildfires have gripped our attention. Both California and Greece have been hit with a drying and warming trend making longer, more intense fire seasons despite being oceans apart (the wildfire that raged through the coastal area east of Athens, Greece has left 91 people dead and 25 missing).

Just last week Japan experienced record-breaking heat that sent 22,647 people to the hospital. While the UK — a region normally associated with rain — has been suffering from forest fires, drought and anticipated food shortages and Sweden continues to feel the impacts of its drought and wildfires — including in regions north of the Arctic Circle. As you can see, these heatwaves and wildfires aren’t just impacting one area, they’re happening around the world.

All of these weather events can be tied back to climate change. Scientists have already surmised that climate change made northern Europe’s heatwave twice as likely.

And while the extreme weather rocking countries across the globe is concerning, it’s not entirely shocking.

Scientists have long predicted that the world would witness these changes in the frequency, intensity, duration and timing of extreme weather and climate events. And they have warned that this year’s disasters are just a sign of what is to come.

In Canada we see a clear trend of rising temperatures. In 2016, the average temperature across Canada was 2.1 degrees Celsius hotter than the norm from 1948-1990, and over 3 degrees hotter in the north. This warming trend is projected to continue under all scenarios of future climate change. By 2100, the number of days above 30 degrees Celsius in Canadian cities is expected to double and a one-in-20-year hottest day may become a one-in-two-year event. 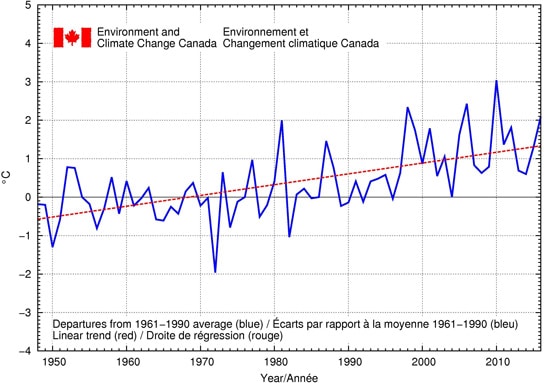 In the wake of the deadly heat wave that engulfed eastern Canada in early July, and the other alarming headlines from around globe that have captured our attention, we think it is timely to step back and reflect on the state of play of Canada’s plans to combat climate change.

While Prime Minister Justin Trudeau has claimed to international audiences that “Canada is back” when it comes to global leadership on climate action, closer to home we can see he is merely keeping to our country’s long history of making big promises and then failing to live up to them — this seems especially true given this week’s announcement that the federal government has decided to hand out favors to big industry by announcing plans to water down its carbon pricing plan for large polluters.

According to a joint audit conducted by federal Environment Commissioner Julie Gelfand and auditor generals in nine provinces, Canada is not on track to meet its climate goals for 2020 and 2030. They estimate that Canada will overshoot its emissions target for 2020 by a whopping 20 per cent. Meeting our 2030 target will require “substantial effort and actions beyond those currently planned or in place,” and that assumes no back-sliding which we are already beginning to see.

Are we surprised? Not exactly. Canada set its first GHG reduction target in 1992. We aimed to reduce annual emissions to 613 megatonnes by 2000. We went over the mark by 20 per cent. Next, in the Kyoto Protocol, we committed to a target of 576 megatonnes by 2012. We missed that target by 25 per cent, pulling out of the agreement at the last minute to avoid penalties. In two years we will miss our target for 2020 (612 megatonnes) by a wide margin.

Here is Canada’s track record: We set targets and then fail to meet them. Since the 1990s the science of climate change and its devastating impacts has strengthened but Canada has done little to halt the damage. In fact, the numbers show that our federal government has overseen a substantial increase of GHG pollution in the last three decades.

Wondering why? Well, according to Gelfand’s audit we’re great at setting targets, okay at making plans, and weak on actual implementation through laws and regulations that reduce GHG pollution.

But beyond the brass tacks our federal government just suffers from a lack of vision and political will. The next few decades will see advanced industrial countries phase out fossil fuels from their economies. This is both necessary, to avoid the most dangerous impacts of climate change, and pragmatic, to keep pace with global economic trends toward renewable energy and electrification of transport.

Meanwhile our federal government is prepared to spend over $15 billion for a tar sands expansion pipeline and continues to subsidize fossil fuel production with about $3.3 billion of taxpayers’ dollars a year. Imagine the clean economy infrastructure that could be built with $15 billion! And with $3.3 billion a year our federal government could pay for the education of 260,000 students or put $94 dollars into the pocket of every Canadian.

The federal government’s direct and indirect supports to an ever-growing fossil fuel sector tell you more about its seriousness on climate change than lofty rhetoric or a grand plan ever could.

Nearly a year and a half ago, the federal government, eight provinces and all three territories agreed to hold polluters accountable by putting a price on greenhouse gas emissions as part of the national climate change plan, Pan Canadian Framework on Clean Growth and Climate Change.

The framework is meant to provide a national plan to meet Canada’s 2030 emissions target, especially by requiring provinces to put their own price on pollution by the start of next year — otherwise polluters will face a federally-imposed one.

Fast forward to today, and things aren’t so harmonious. Saskatchewan has outright refused to impose its own pollution tax (and vowed to fight any federally-imposed carbon price), while the upcoming Alberta election means that their seat at the table is on uncertain ground. And then there’s Ontario.

As many of you have likely heard, the country’s most populous province hobbled its plan to reduce GHGs in early July when Doug Ford scrapped Ontario’s joint cap and trade program. Then Ontario followed up by repealing the Climate Change and Mitigation and Low-carbon Economy Act, 2016 and doing away with the province’s GHG reduction targets. All this without proposing an alternative plan for reducing GHG pollution.

And Ottawa is not taking too kindly to Ontario’s new position.

Federal Environment and Climate Change Minister Catherine McKenna has said that Ford’s decision to end the program without an alternative plan is a clear sign that it is not taking climate action and holding those that pollute our atmosphere to account.

As a result, Canada hit the brakes on more than $400 million in funding to Ontario under the Low Carbon Economy Leadership Fund — a program designed to help provinces implement their plans to reduce GHGs and support clean energy growth initiatives, like renovating buildings and retrofitting houses. And Ontario will soon face the federally-enforced plan. In response Ontario is joining Saskatchewan’s shaky legal challenge to the federal scheme.

British Columbia stands out as a potential beacon of hope. Though the government scrapped its 2020 target in the ironically named Climate Accountability Act, it has committed to getting B.C. back on track with new reduction targets for 2030 and 2040 and increasing its carbon tax. However, all eyes will be on a long-awaited climate plan due in the fall, which is hoped will set out the policies needed to make up for a lost decade under the previous government. It will also need to show how it can square a renewed push for liquid natural gas developments with its climate commitments, as this industry’s massive GHG emissions could swamp reductions made elsewhere.

Let’s be real. Even if we see carbon pricing and other policy measures take hold across the country, the progress will be undercut if we continue expanding our fossil fuel industries. More GHG pollution from oil and gas means a virtually impossible burden on the rest of the economy to reduce emissions.

Taking stock we see that Canada is making little to no progress in reducing our GHG pollution. All else being equal, this can only mean one thing — more climate change to come. More extreme heat, flooding, wildfires, sea level rise, drought, and, eventually, international migration.

Instead of aggressive action we see our governments investing more of our dollars in yesterday’s fossil fuel economy. This undermines what positive work that is happening and exposes us to greater losses down the road when the global economy leaves us behind.

If our governments are not up to the challenge it falls to citizens to push for change. Lawsuits to protect our environment and secure everyone’s right to a safe climate are one part of that push.

That’s why the Ecojustice team remains committed to continuing to stand strong in the face of projects like the Trans Mountain pipeline that take us in the wrong direction on climate change and put the health of our communities and the environment in jeopardy. And when the Senate sits again in the fall, we’ll be back on the Hill advocating for stronger environmental legislation.

The road ahead is bound to be long and bumpy, but someone has to travel it. We’re up to the challenge. We hope we can count on you to stand with us.

Thanks to the support of people like you, Ecojustice goes to court to protect what we value most — the air, land and water that sustains all life. Make your gift today and support bold litigation for a brighter environmental future.
Donate!

Behind the scenes: An inside look at Ecojustice’s advocacy for better environmental laws

Canada marching in the wrong direction on climate change

STATEMENT: New pollution targets risk being a ‘fig leaf’ for inaction without an overhaul of B.C.’s climate laws, says Ecojustice